Battle of the Deer Protein Brands – Double Down vs. West Feeds, round 2 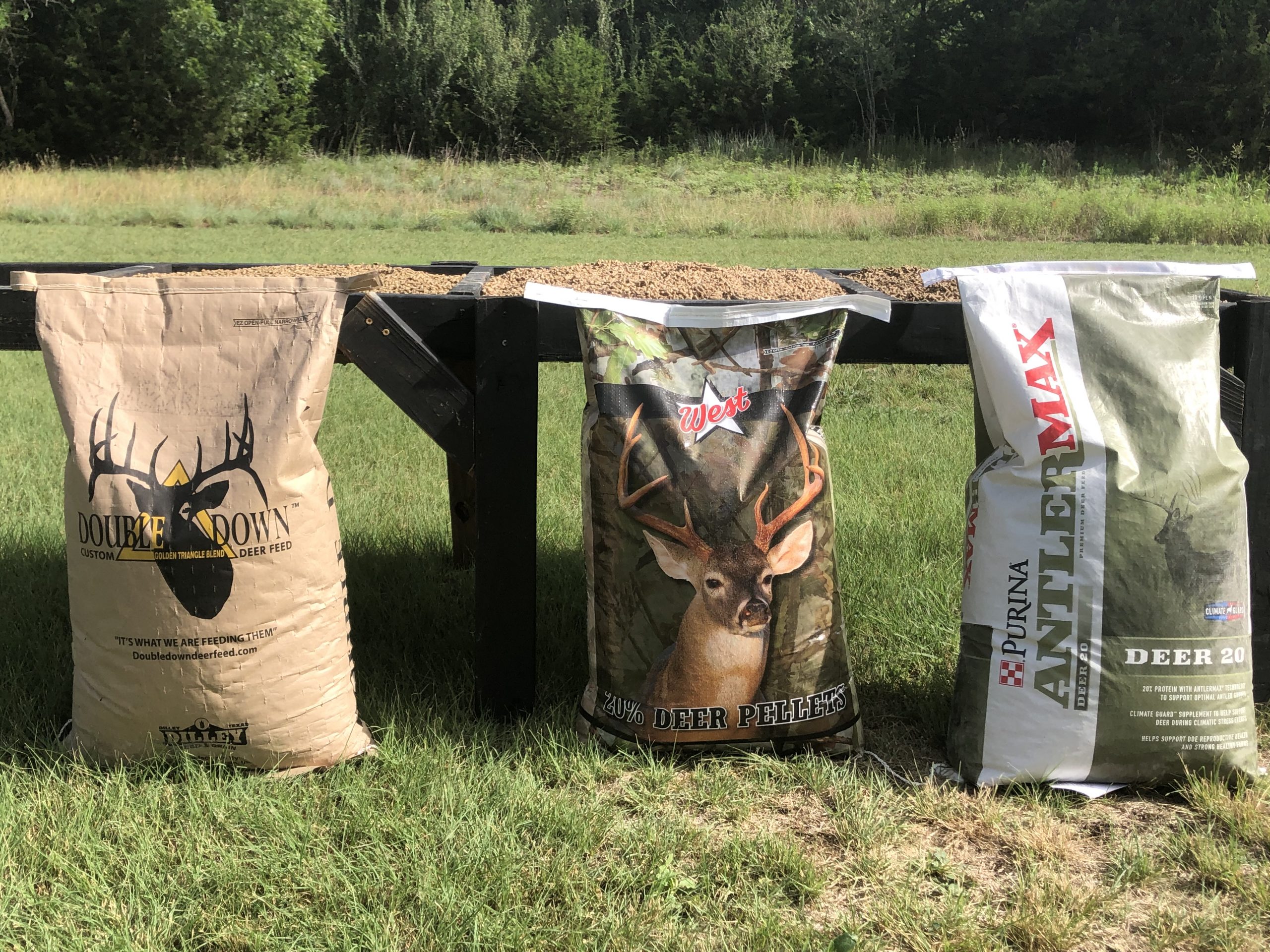 I can remember growing up as a kid in the early 90’s, heading out to the deer lease to fill our spin feeders with corn for the coming deer season and taking some shots at dove in the evening hours.

Filling feeders was once a year for the most part.  We’d only top off the feeders when we wanted to keep them going for turkey season at the end of the deer season.

However, towards the end of my tenure in Throckmorton, Texas, we started keeping the corn feeders going year round.

Year round corn feeding was in and here to stay.  Fast forward a few years later and a new feed type and strategy was born: deer protein and deer protein feeders.

I remember tearing that “easy tear” seal off of my first deer protein pellet bag and thinking, “man, this stuff smells and looks like one of those bran cereals”.

I kept that thought until I went to check on a spin feeder we had full of deer protein and moisture had found its way into the barrel. That nutty, graining and fragrant pellet looked like one of Mr. Whisker’s kibble in his water bowl and smelled even worse.

I wasn’t wild about feeding protein out of a gravity protein feeder at first but this stance didn’t last long.  I quickly realized giving deer the ability to feed on a highly nutritious protein pellet was a good thing and would have a positive impact on Rancho Bandito.

There seemed to be a “one brand serves all” type mentality and it went on like that for sometime.  Today its much different.

Hunters have multiple choices to choose from.  This being said, which brand is best?  Which brand do the whitetail deer really prefer, or do they even care?  Is there a scenario similar to human food where one brand taste like a candy bar and the other tastes like a stick of cauliflower?

Without learning the deer language and sitting down to conduct a survey with them I do not feel we will ever really know what makes them like what and why.

Tests are really the only mechanism we have to measure attractability in a deer protein pellet.  So we set up a test in 2020:

Purina AntlerMax vs. West Feeds vs. Double Down, lets get it on! 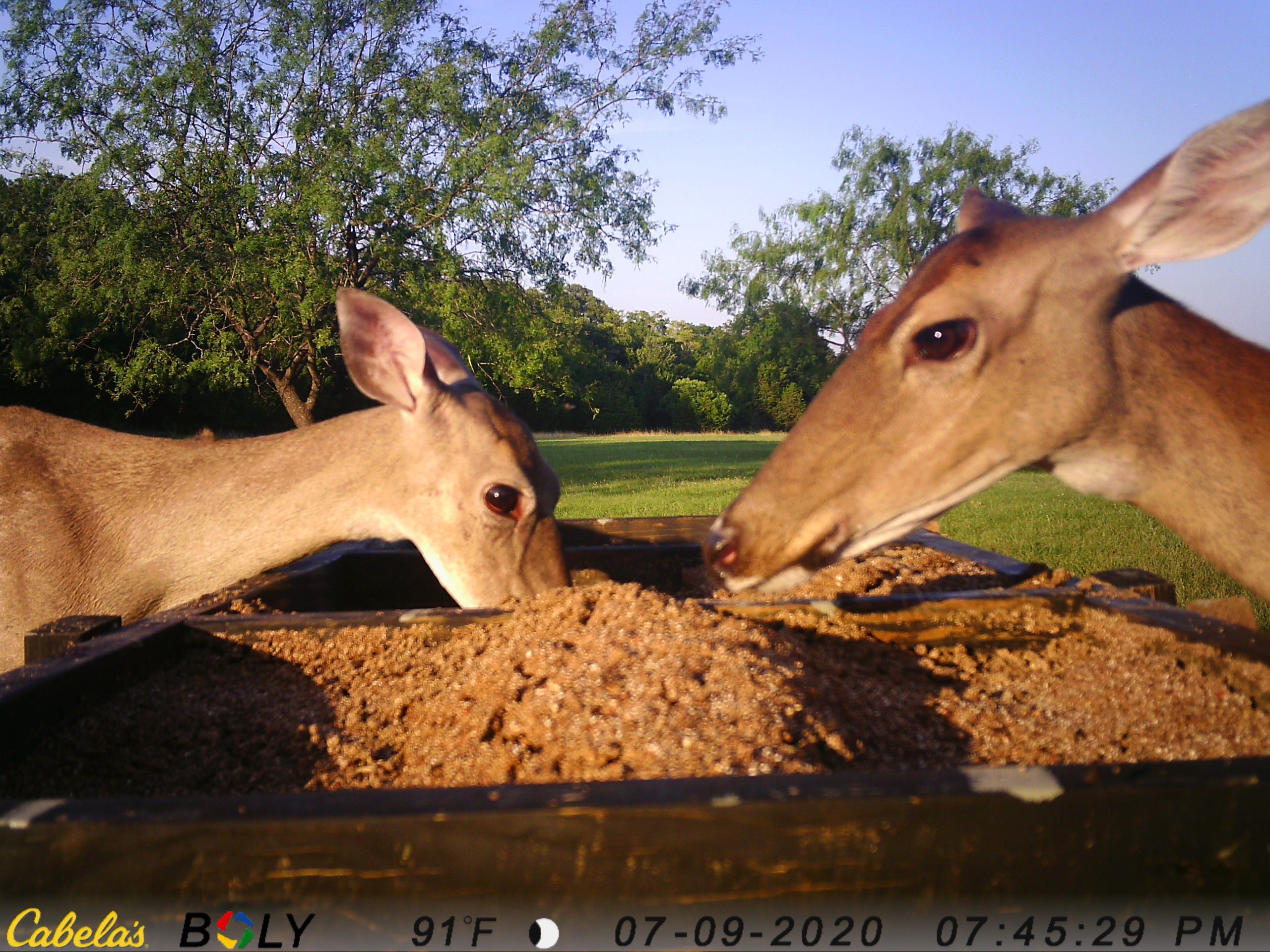 Yes sir, the idea came to me many years ago and I got her built and filled for the 1st Feed Bandit battle of the deer proteins tests.

Each section held a single bag of deer protein pellet.  We staged the trough in a high traffic area that does have exotic game such as black antelope and axis deer.

The first area WAS fed Purina AntlerMax at one time but it had not been fed there is sometime.  Still, AntlerMax was the choice of feed followed by West Feeds.

Double Down would have been completely consumed as well but several days of glorious rain followed by oven-worthy heat created a stink brownie and the deer stopped visiting the trough. 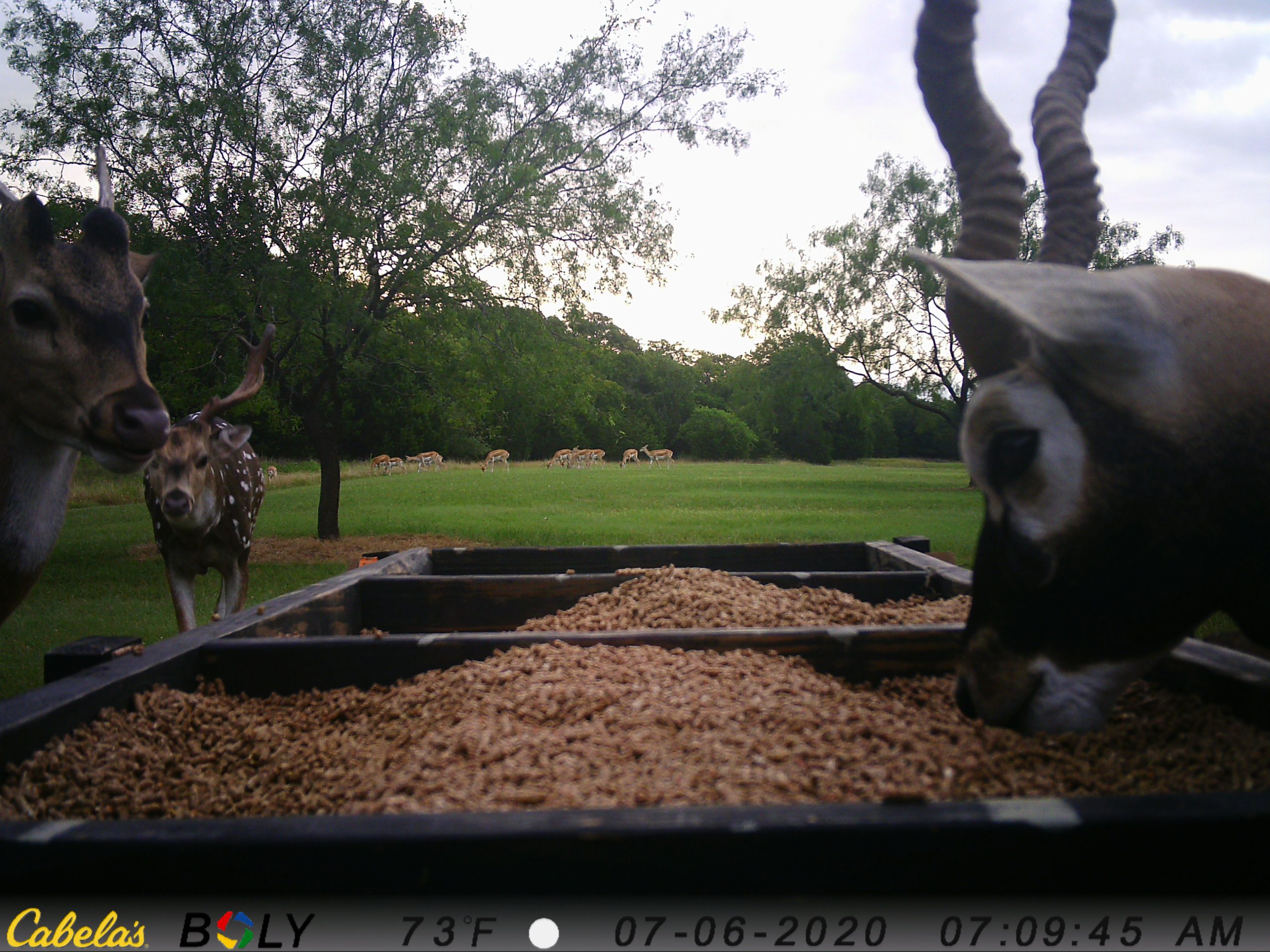 So, we know that black buck antelope and axis deer are feeder pigs…check.  Moving on.

Test site number two was in a different pasture, free of exotics but did have pigs.   Sigh… real pigs… 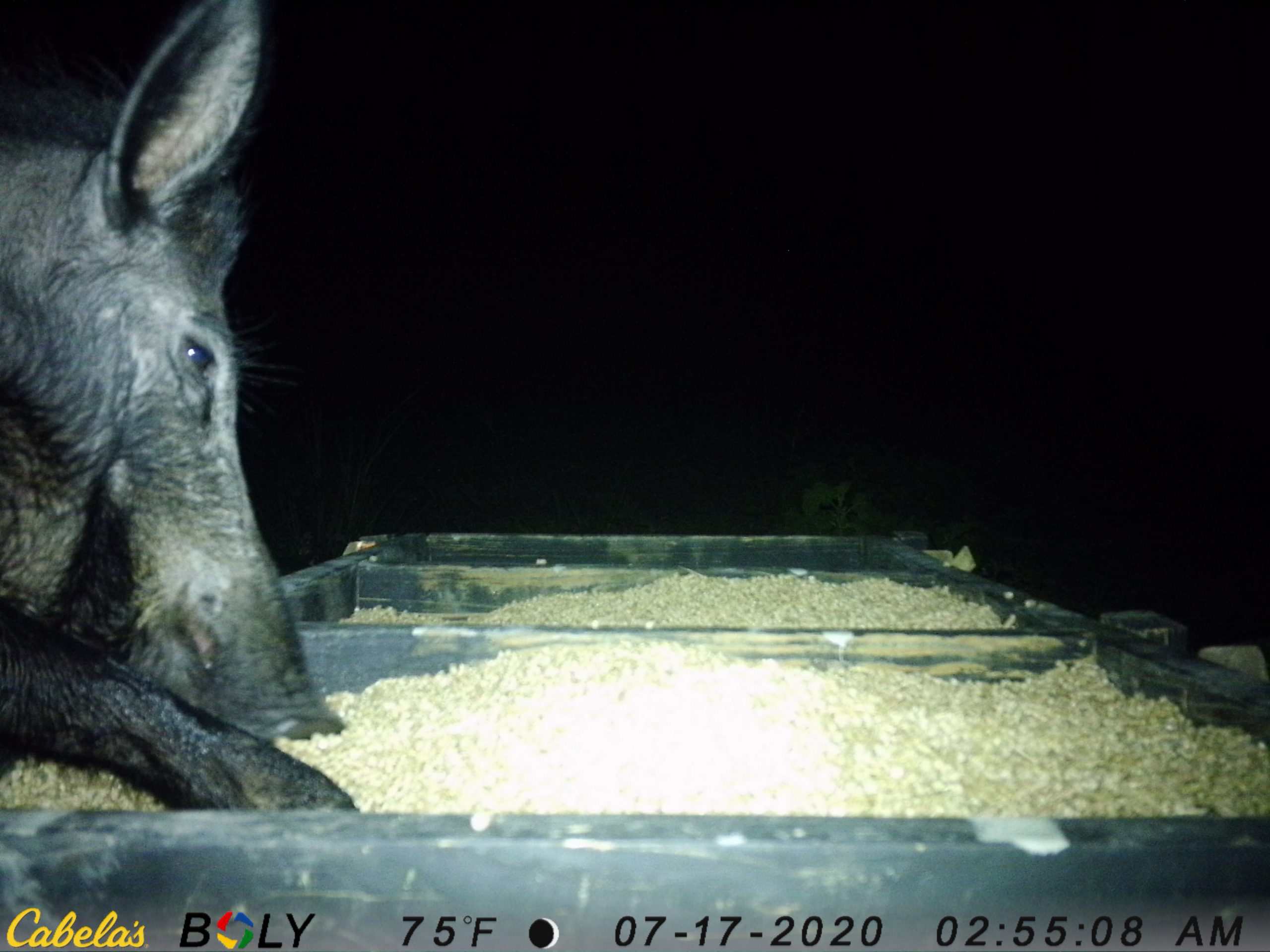 We caught plenty of deer passing by the trough but none stopped to sample the goods.  The pigs and coons devoured the protein and even broke the Feed Bandit trough!

Side note:  Those same coons who gourded themselves in July of 2020 met their maker in March of 2021!  All five of them. Check out how we did (oh, and subscribe to our channel!):

The rain returned for test number three and the added moisture added weight to the protein and the trough gave way.

Its death would not be in vein, however.  As I threw the Feed Bandit testing trough into a massive cedar tree burn pile a new testing plan was born.

I spent the balance of the summer digesting the lessons learned from the first test and how we could do it bigger and better.

I concluded that the first test, although interesting, was not as useful as I had originally thought.

Feed Bandit.com was created to help the everyday hunter find the feed and supplies they need in route to their property while also benefiting the small town feed/gear suppliers.  Therefore, any tests we conduct need to be geared towards the weekend warrior who may not have a $1,000 protein feeder and $10,000 a year to spend of deer protein pellets.

Going further, what if this weekend warrior was going to start a off season supplemental deer protein feeding program in a pasture/lease that has never been feed deer protein?  What can they expect?  How long will it take the deer to find the protein?  Will they eat it out of a protein feeder?  Do they prefer to feed off of the ground?  What is my loss going to be to non-target animals? How long will my feeders stay full?  Do they prefer the $15.00 a bag feed better than the $9.00 per bag feed?

These are all questions I have heard before and set out to answer.  We choose two popular brands of deer protein pellets from the last test Double Down and West Feeds.

As mentioned in the first test, we are not financially compensated by either company.  These tests were conducted fairly.

Double Down vs. West Feed, Round 2…Fight!

Our original goal was to start the test in January so we could capture the deer’s instinctual need to feed post rut. Unfortunately do to various uncontrollable reasons the test did not officially get underway until mid march.

However, Rancho Bandito had not yet had its spring green up and cooler temperatures were still around. 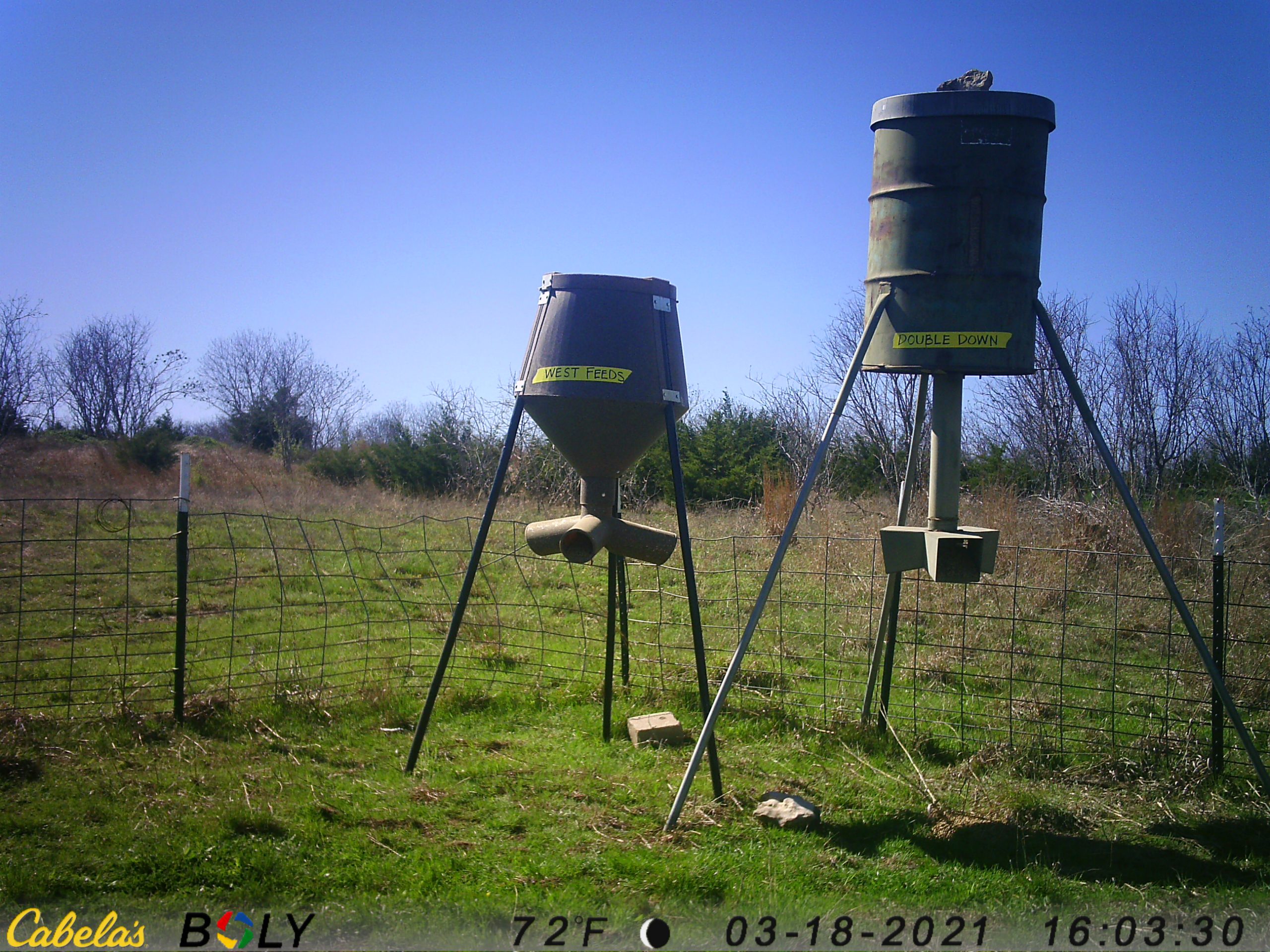 Before conducting the test, both feeders were sealed up as much as possible.

Again, one of the goals was to conduct a test using non-expensive feeders.

The feeder pen in picture does have a corn feeder barrel that was destroyed by hogs in December so it has not worked since then.

The barrel did have some leftover corn in it.

Several weeks went by and the feeders both appeared untouched.  I was surprised. 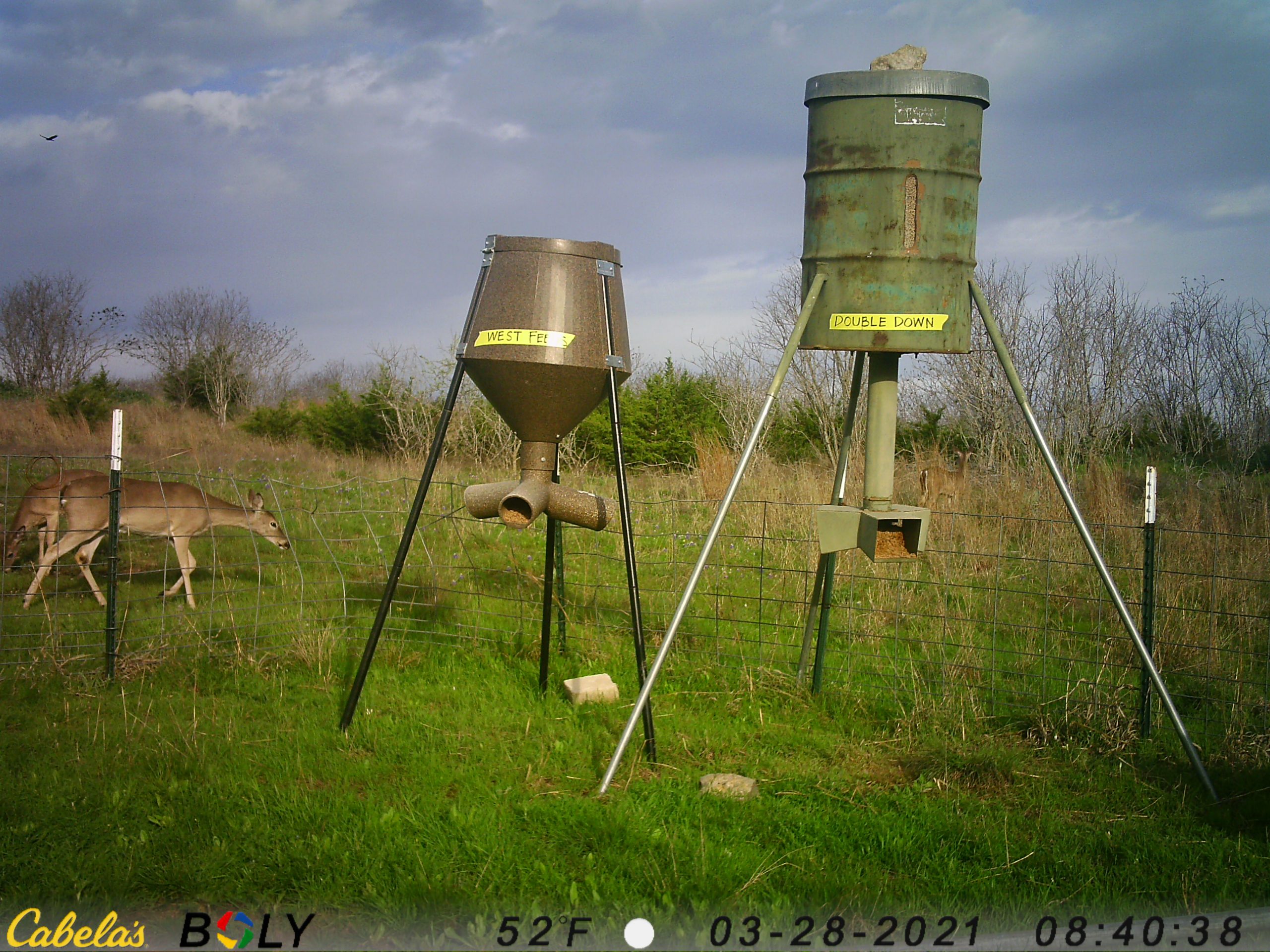 The problem wasn’t the lack of deer, we had them.  It’s just that they didn’t seem to care about the feeders.

I was convinced that they could smell the protein feed but why were they not feeding?

I checked the camera on April 10th and still no deer had gone into the pen!

It had been a month, and no action inside the pen.  I was stunned but this is the valuable data first time protein feeders want to hear.

I decided to try something in an effort to get the deer to at least come into the pen.

2 days later…finally…we had a deer take its first bite from one of the feeders.  West Feeds got the first bite award.  April 12th would start the beginning of a gradually ramp up in feeder activity.

Lesson Learned:  Mix deer corn with your deer protein when starting a new deer protein pellet feeding program.  The test went almost a month without any consumption before we spread some corn out.  Several days later, the first bit of protein was consumed.

Through out the entire test period, we were consistently fighting mother nature. 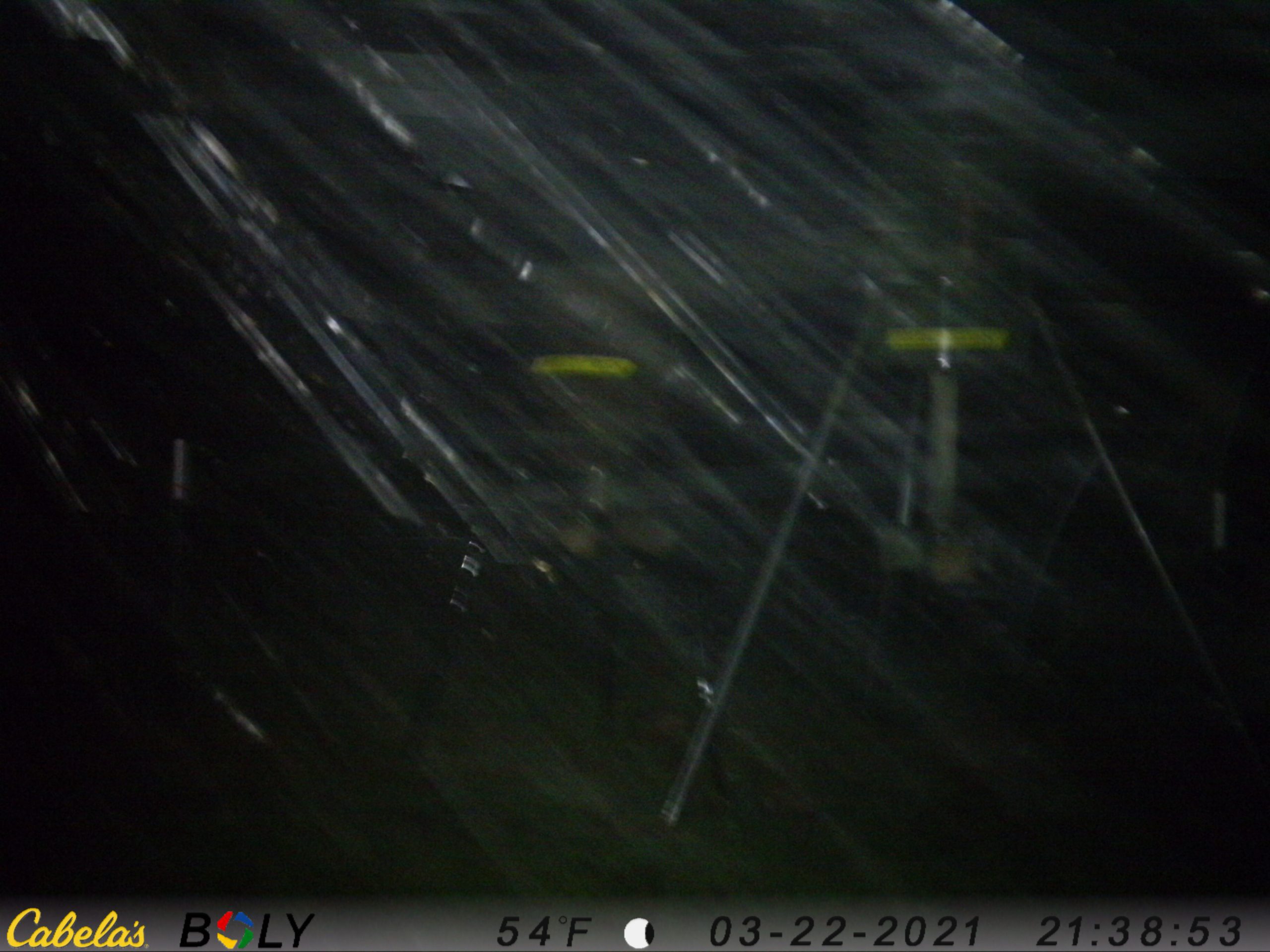 You will never hear me complain about the rain but it did make the test more challenging as the feeders would frequently clog.

The feeder holding the Double Down protein was the most susceptible to excess moisture.

The first 16 days post corning of the pen the Double Down feeder had 21 visits and the West Feeds feeder had 18.

Mid way through the 16 days, we did notice that the West Feeds feeder did have a clog but it was not bad enough to 100% block the flow of protein feed to the tubes.

The Double Down feeder had to also be unclogged.

Consequently, there was a decent amount of protein pellets on the ground under both feeders and the deer took full advantage of the offering.

A majority of the deer who visited the pen during the time the protein feed was on the ground ate exclusively from the ground and not from the feeders.

I assumed this was natural to them so they preferred the ground to eating from the tubes.

The longest stretch of the test went for 23 days.

During this 23 day period, as previously mentioned, the deer and raccoons wiped out the remainder of the protein on the ground under both feeders.

Surprisingly, we did not get a single picture of raccoons eating the West Feeds protein but they frequented the Double Down feeders every other night it seemed.

We never had a picture of them actually climbing the feeder which was surprising too.

During this 23 day stretch the Double Down feeder was visited 76 times and the West Feeds feeder hit 86 times.

These number did not include the deer consuming protein from underneath the feeders. 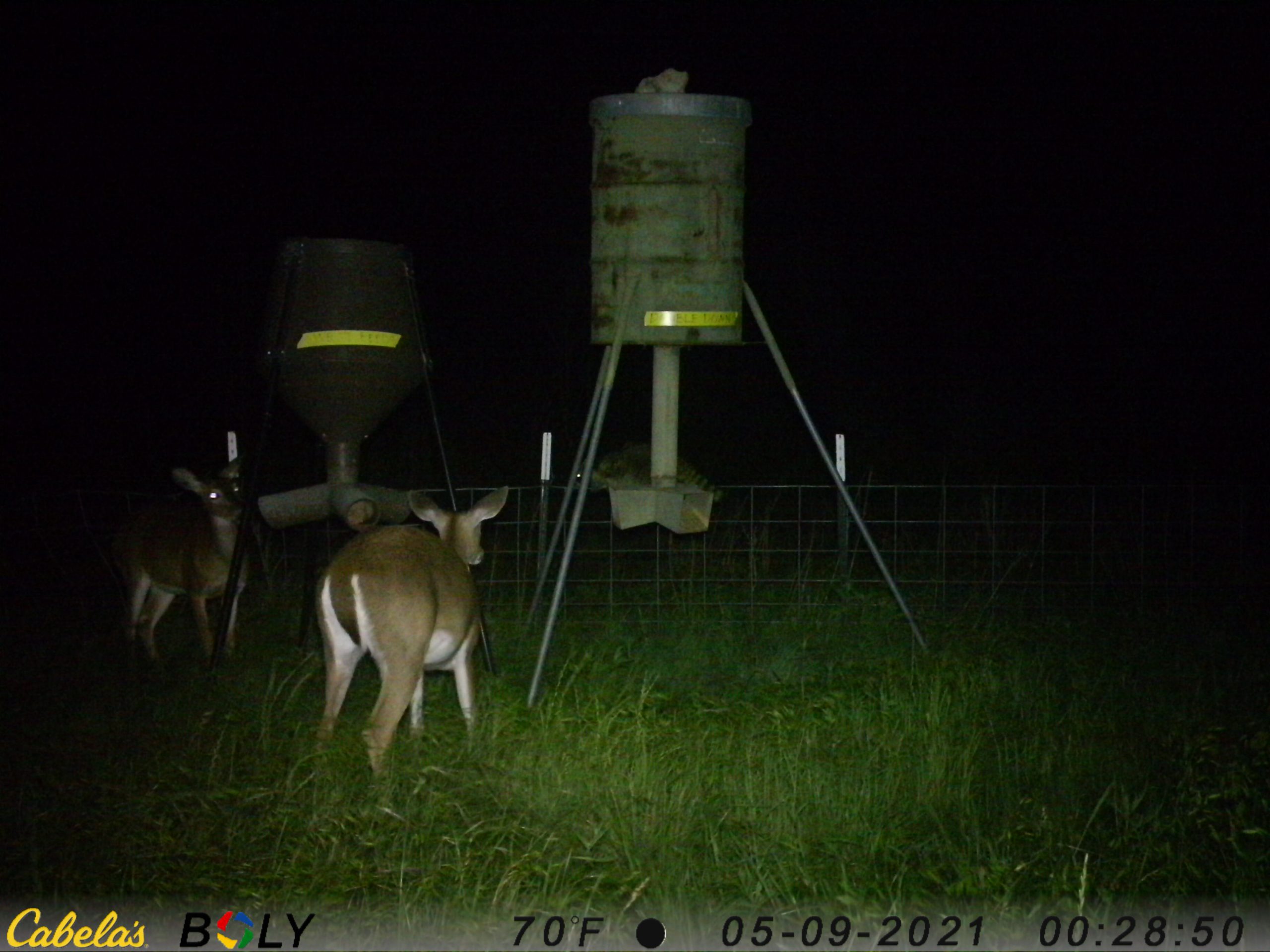 Lesson Learned:  Does it make sense to purchase a low trough style feeder as apposed to a tube style protein feeder since in this test it appeared to be more natural for them?  This test definitely seemed to pinpoint their desire to eat from the ground instead of a tube. 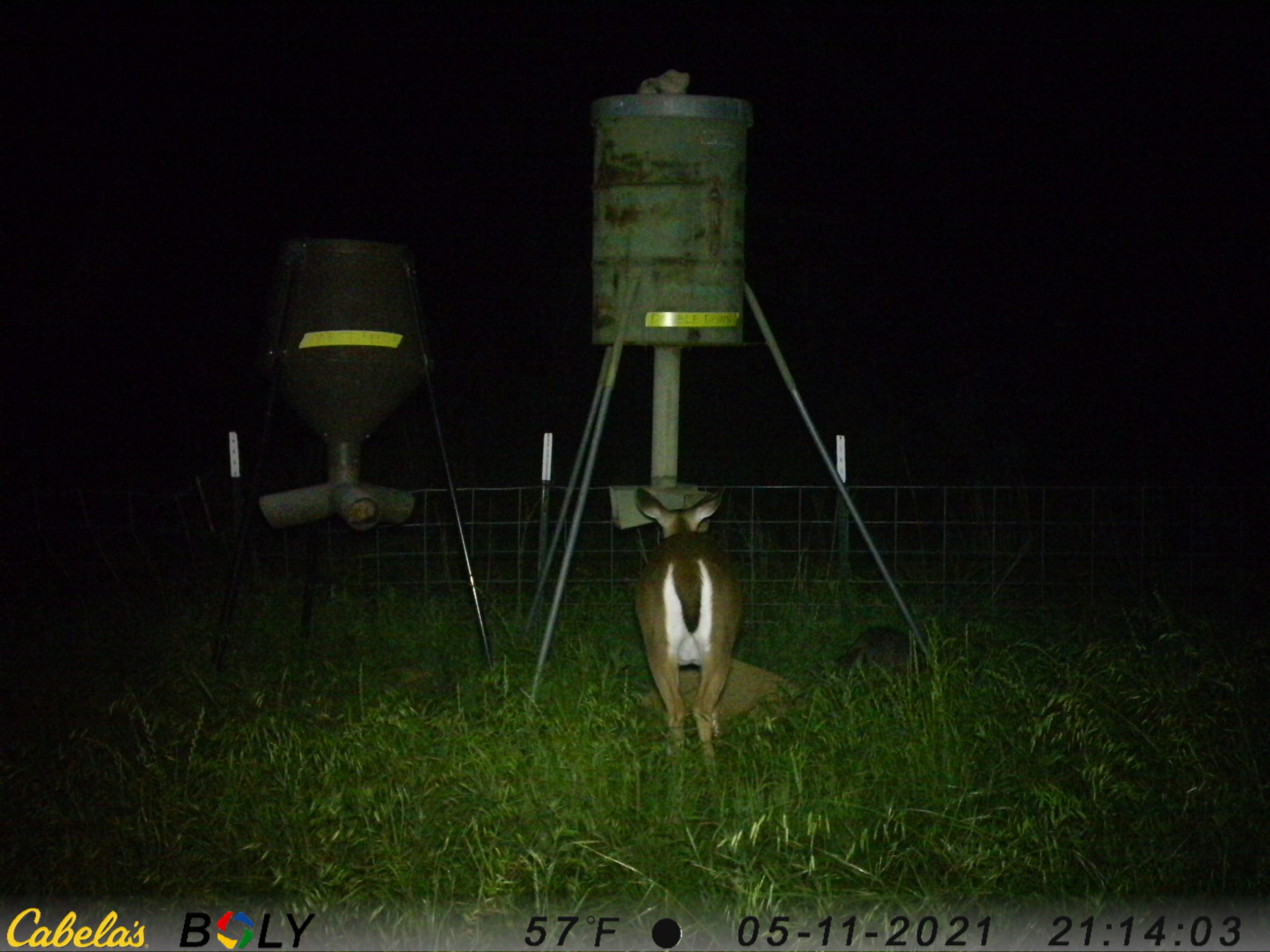 Throughout the test I did notice that the does did not seem to favor one brand or another.

The bucks were defiantly more opinionated.

We counted anywhere between 4-5 bucks who frequented the pen to feed.

There was one buck who stuck out due to his age/size. 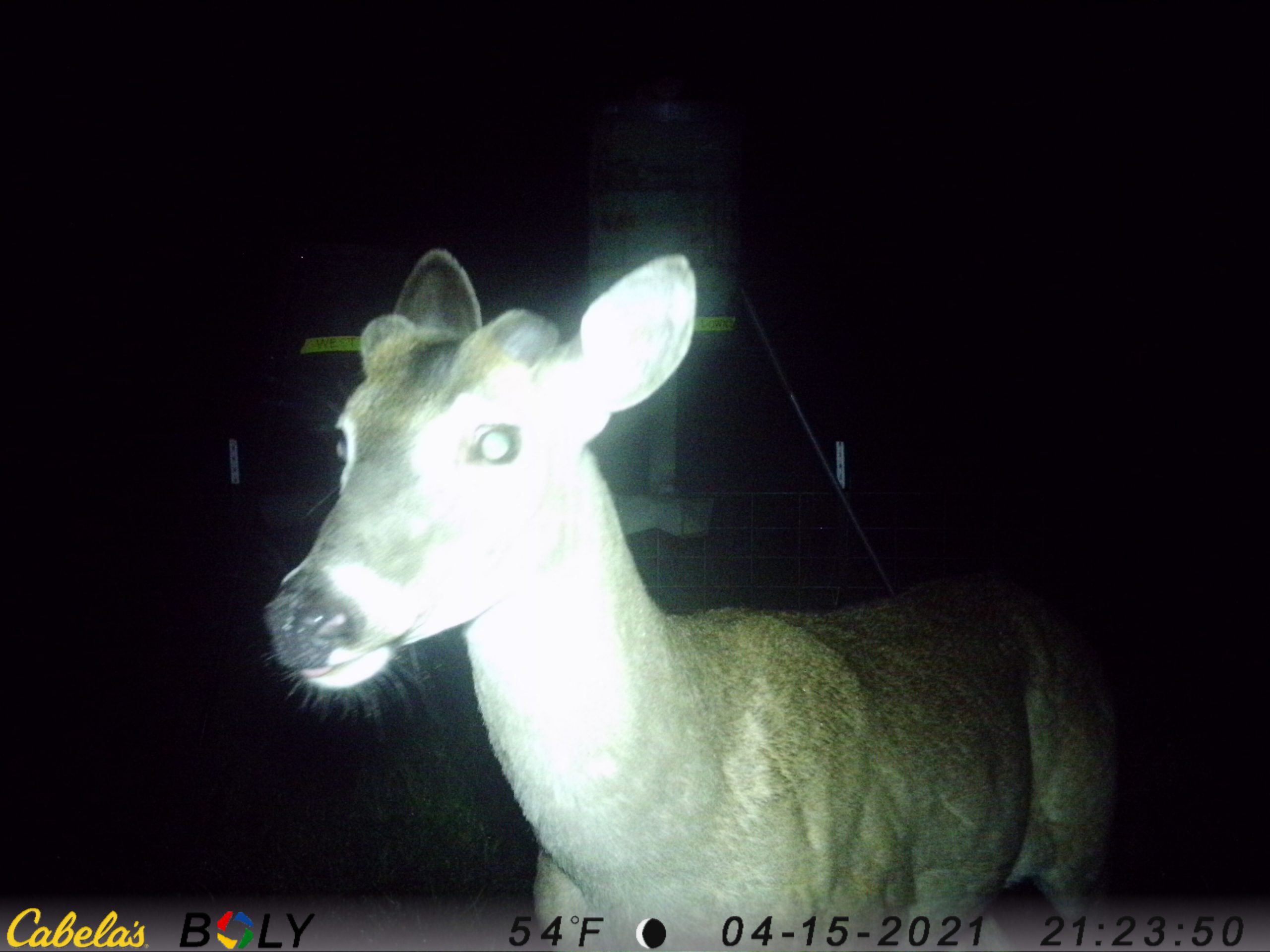 He was a routine visitor and would sometimes make two trips per night.

Towards the conclusion of the test, the Double Down feeder was empty.

The Double Down buck still went to this feeder but then would make his way back over the West Feeds feeder.

Lesson Learned:  The bucks seemed to prefer the Double Down protein blend.

The last part of the test was by far the wettest.

Both feeders had clogged several times with the Double Down feeder getting clogged the most. 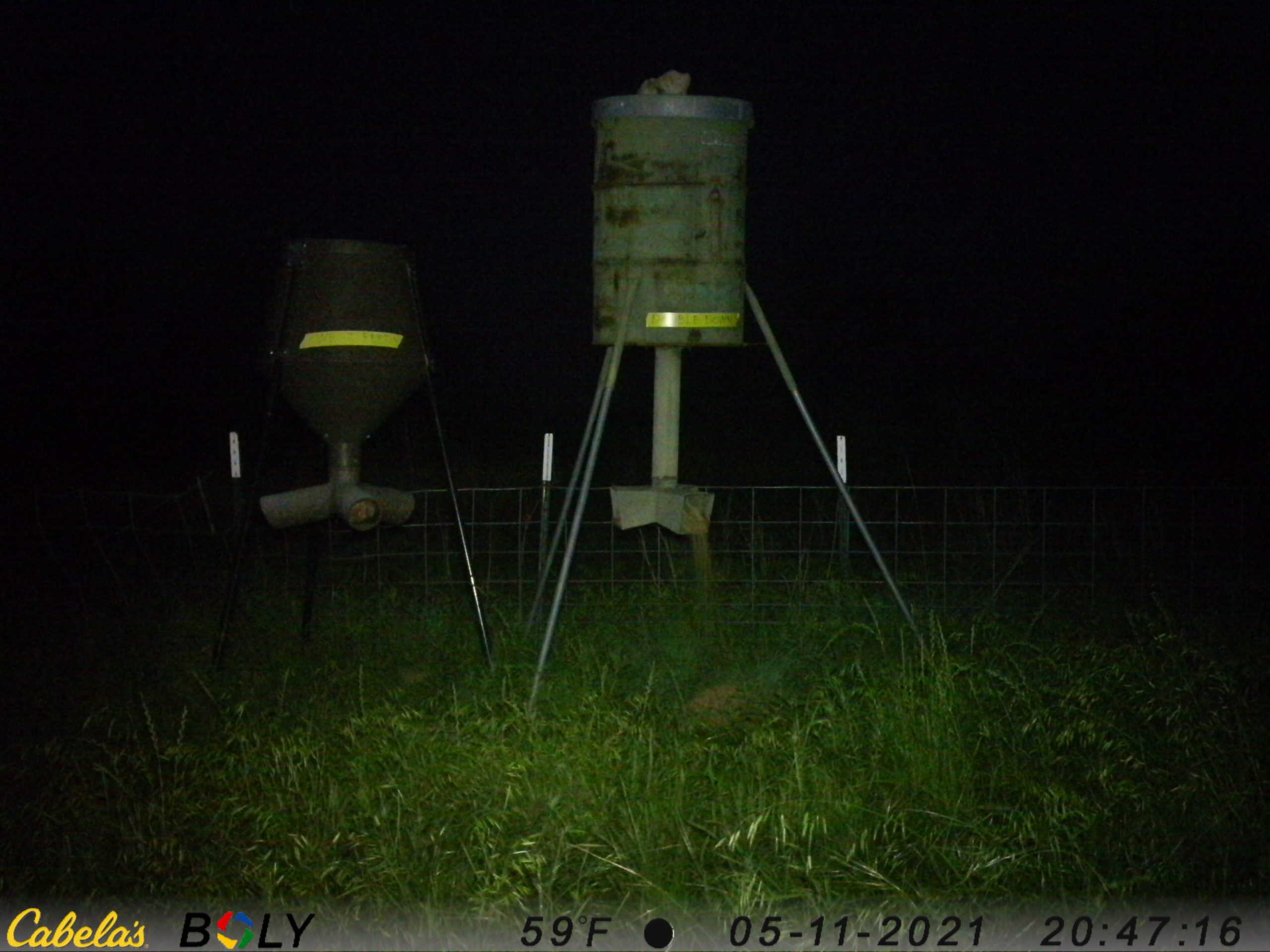 The last 9 days of the test were overwhelmingly skewed towards West Feeds. 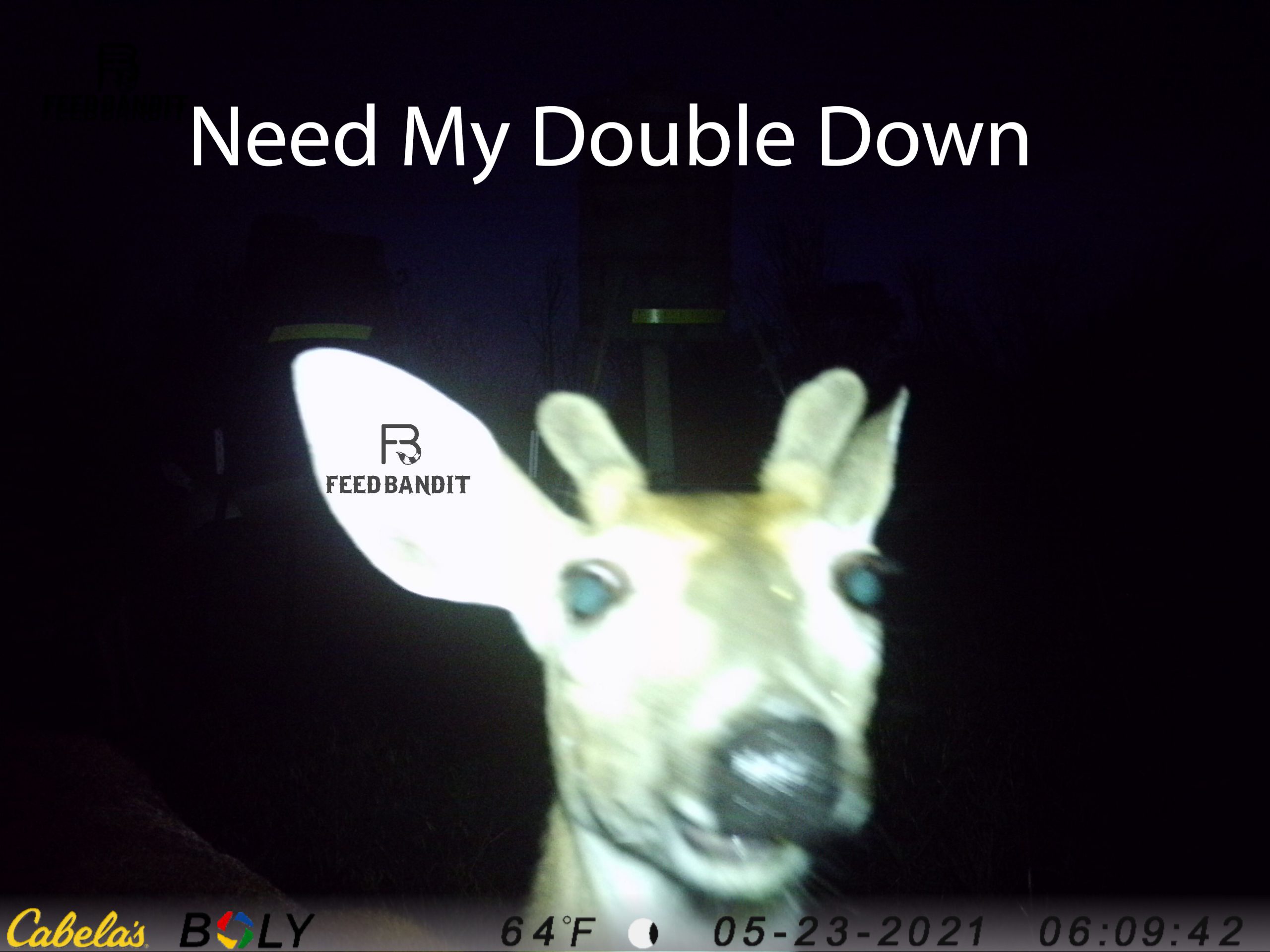 Here are the final stats of the Feed Bandit Battle of the Deer Protein Brands – Double Down vs. West Feeds

So the big question is who won?

The stats say West Feeds based on overall visits but the results were extremely close and as I said earlier, the count was as accurate as possible.

I painstakingly reviewed 1,200+ pictures every time I pulled the camera cards and did my best not to double count.  The camera snapping pictures every few seconds did help.

Double Down, however, takes home the prize of being the buck’s favorite.

At the end of the day, both performed well and I believe both will benefit your deer! 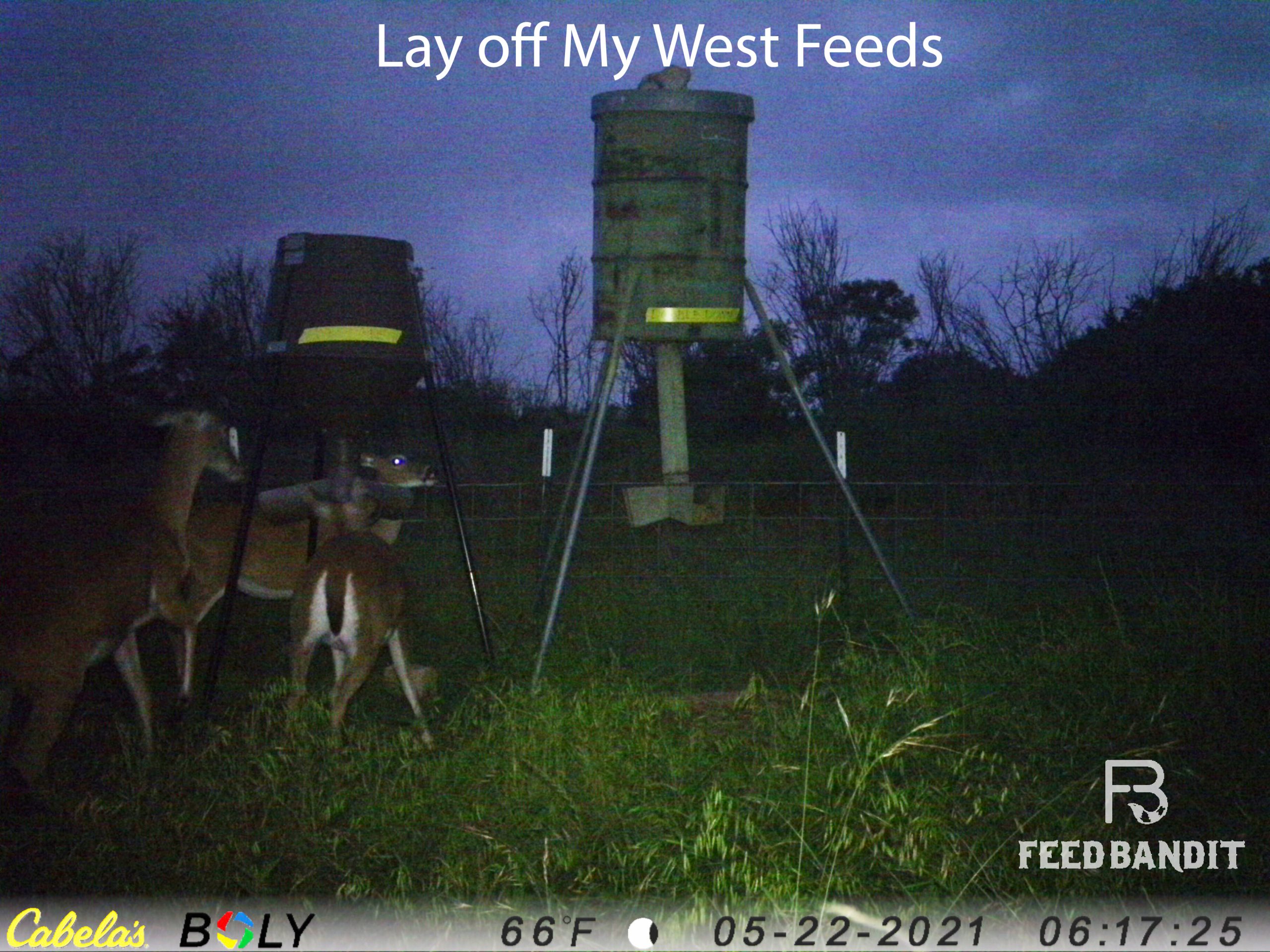